This milonga was written in 1939 by Charlo (Carlos José Pérez) (music) and Enrique Cadícamo (lyrics). We have three interpretations from 1939: The first was recorded by Francisco Lomuto on the 8th of August, then Julio De Caro on the 7th of September, and then Francisco Canaro on the 23th of November. 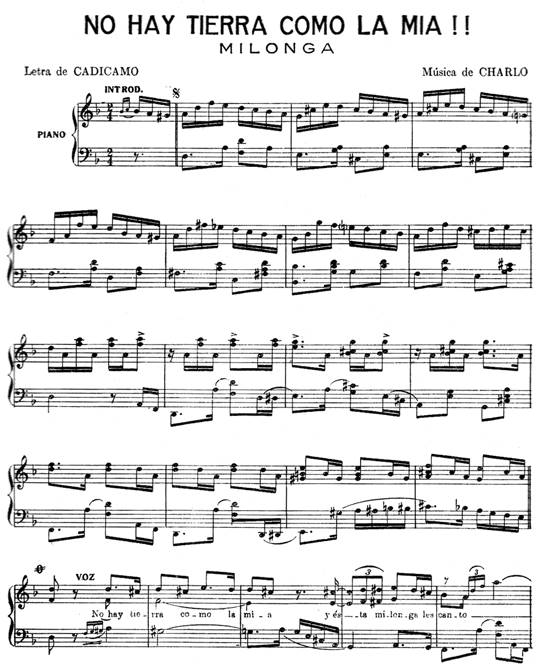 The lyrics says "I love my homeland", and it's sung in a very enthusiastic way, in all versions. Even people who don't love any homeland love this milonga, because it's really driving and cheerful.

These are the versions we compare:

Canaro's version is the most well-known. The parts are short, and the structure is ABABABA. The A part consists of two completely different motives, the first with a catchy melody in sixteenth, and the second starting with a series of off-beats of sixteenth, rhythmically challenging! In the B part we have a lot of dotted notes and small rubatos, which produces a very cool elasticity. The second B part is sung by Ernesto Famá with his metallic, almost breaking voice that expresses well the enthusiastic lyrics, in dialogue with the bandoneons. After the singing we have a piano solo and later a trumpet solo.

Lomuto's version is quicker and even more energetic. In the first parts, the arrangement is more or less the same as in the Canaro version, without the nice rubatos in the B part. But then the singer comes back and sings two more verses, and after the singing,  the key changes and the energy gets to a culmination point.

And in De Caro's version we have complete craziness: bandoneons with extreme rubato and dissonances and "chaotic" interplay with the violins, and then the singer with even more extreme rubato. And after the singing the last A part with a new countermelody and the abrupt end. This is with 1:56 the shortest version (and one of the shortest milongas ever).